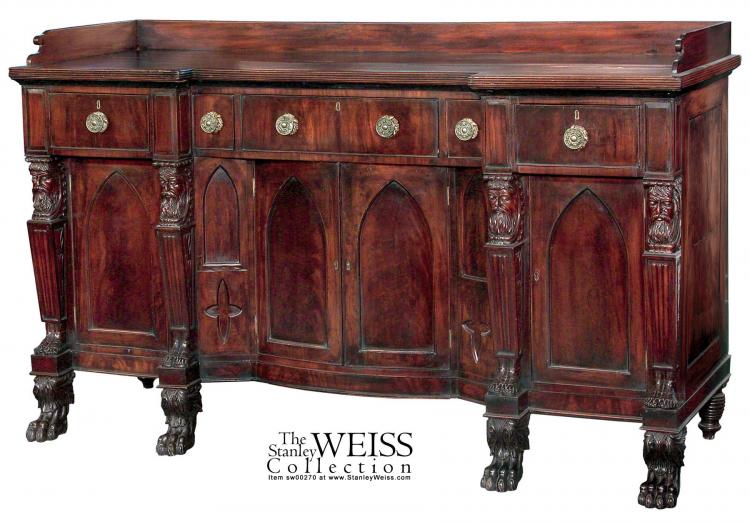 Announcement!  This item will be available at auction from Neal Auction Company on January 26th, 2019.  Preview exhibition is currently underway.  Click here to see our listings at nealauction.com.

This exuberant sideboard is related to a grouping of furniture which, until recently, was attributed to Joseph B. Barry or William Camp, i.e. Camp is attributed as a maker to a related example illustrated in Classical Maryland 1815-1845, fig.164, Gregory Weidman.

Current scholarship points to still another cabinetmaker, Edward Priestley, who also worked in Baltimore during this time. Research presented in an article, A New Suspect: Baltimore Cabinet Furniture Maker Edward Preistley by Alexandra Alevizatos Kirtley in American Furniture 2000, (ed. Luke Beckerdite) reveals Priestley as a possible source. The notable feature in this grouping of furniture is the dramatic mummy heads (Persians) which are taken from illustrations of Bacchus on plates 37 & 57 in Thomas Hope’s Household Furniture and Interior Decoration (807).

Two related sideboards, one with carved figures, and one without, are illustrated in Classical Taste in America, by Wendy Cooper, and American Furniture, ed. Luke Beckerdite . Interestingly, the latter example appears to match ours in many respects with the most noticeable exceptions being the length og the feet and central arched door. The feet in fig. 24 were possibly reduced somewhat or were just constructed this way for a lower serving height.

Attribution aside, this sideboard is a tour de force of the cabinetmaker’s skill, even down to the backboards, which are mortised into the solid mahogany sides of the casepiece in the Newport style. The brasses are probably original and retain an old dark surface, which has been overlaid many times through the years. This sideboard, in scale and size, is monumental, it needs four men to lift it. Having four well-developed caryatids with sandled feet, no less, makes this sideboard, we feel, one of the finest of the early 19th century. As Kirtley puts it "Priestley’s dramatic mummy heads represent one of the most expressive and highly developed manifestations of the late neoclassical style in American furniture." 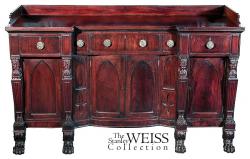 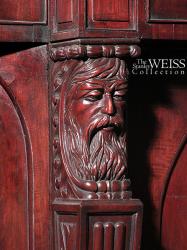 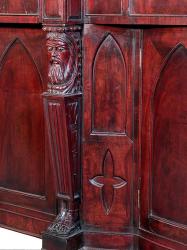 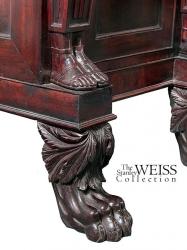 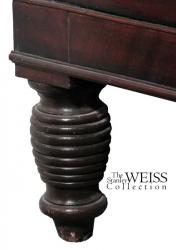 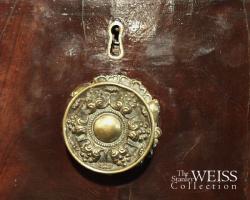 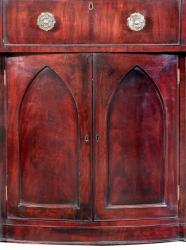 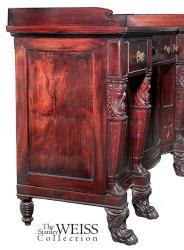 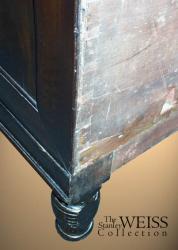 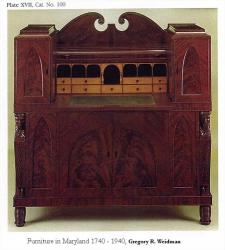 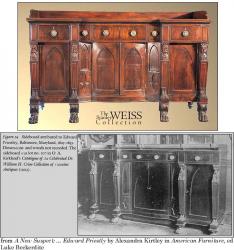 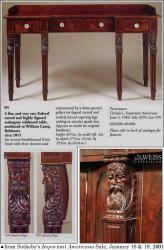 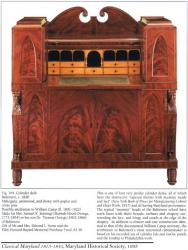