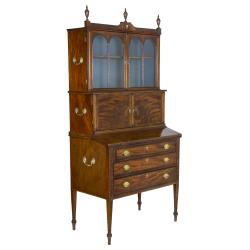 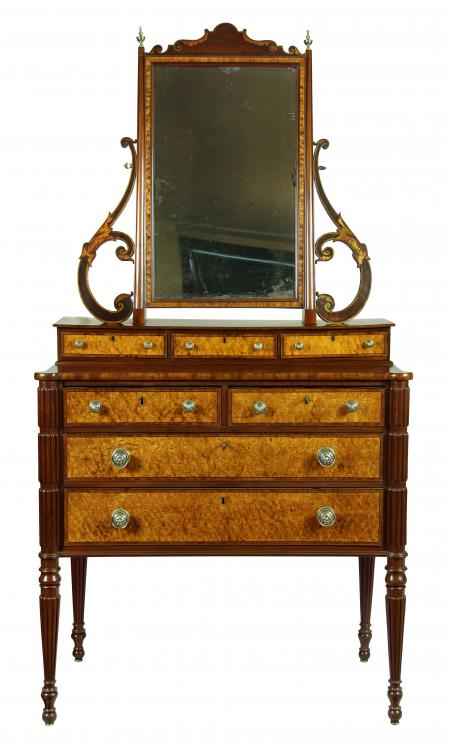 This is a very fine and desirable dressing table by, probably the finest cabinetmaker in Boston, one of the legends of federal furniture.  A very closely related example is at the MFA, and illustrated in American Furniture in the Museum of Fine Arts, Boston, Randall, Cat. no.37. (See below)

Other examples recently sold at Skinner's (See lot history below).

This dressing table was acquired from a descendant of Capt. Thomas Whitteredge, a wealthy merchant and Salem resident (1799-1854) who is understood to be the first owner of this piece.  The Whitteredge family house, built by Close relatives of the Captain in 1781, still stands in Rochester, MA.

Inscriptions:                “No 2" in chalk in a period hand on several drawer backs and on backboard of mirror frame, indicating two dressing tables were probably made at the same time in the shop.

“Whitridge” in chalk in a period hand on underside of left-most small drawer bottom.
A string tag is found in one drawer with the pencil inscription, “Mr. Mills[Wills?] / Nantucket”

Discussion, basis of attribution
The lady’s dressing table with mirror was a distinctive Boston form in the Federal period. Rare examples of the form are known from Salem, a few from New York, but it was made almost exclusively in Boston. They are based on the French designs for “coiffeuses”, which were neo-classical dressing tables with mirror standards built into the top,  usually with one narrow drawer below the top, and sometimes a small bank of drawers at the rear of the top as the present one has, or a shelf. The mirrors were usually round in period French examples, sometimes oval. The horizontal top surface was often a piece of marble, and often with a dished out oval or rectangular central area. Boston versions of this French form typically were larger, with 2-4 drawers below, with a tall rectangular mirror supported by vertical mirror standards. Virtually all have a step-back set of small drawers which the mirror standards are mortised down into. All tops were wood, not marble.

A sizeable number of these dressing tables with mirrors survive, most dating from about 1805-1817. And most can be firmly attributed to the Boston shop of John and Thomas Seymour, or after about 1808, to Thomas Seymour working without his father at his Boston Furniture Warehouse. It seems to have been almost de rigeur among Boston ladies of social standing to have one.

Seymour made these with numerous variations in basic design and in specific details of construction and ornament. Although the mirrors and frames are almost always rectangular, at least one particularly elegant example has a circular mirror.1 At least two others have oval mirrors and frames.2  All have elegant curving mirror standard brackets, and most also feature handsome crest rails of varying designs atop the mirror frame.

Within this basic format, Seymour produced an enormous number of variations. With a very few exceptions, no two are identical. The present example incorporates two styles – Federal neo-classical with the strong contrast between dark mahogany and light maple; and English Regency, with the scrolled brackets and turned legs with interrupted, segmented courses of large-scale reeds.3 Note that the reeded segments line up exactly with the drawers beside them. And note also the 3-beaded molding that surrounds the lower edges of the case, which returns around the legs as a turned molding of identical design. This is a very architectural treatment. No furniture designer in Boston understood as well as Seymour the architectural foundation of neo-classical and Regency furniture designs. His typical treatment is also found in the way these 3-bead moldings are set into 1/8" deep grooves in the case so they would not be easily dislodged or broken out.

Seymour frequently collaborated with other skilled craftsman subcontracts in producing these dressing tables. Leafage carving was often used to ornament on the scrolling mirror brackets, executed by the immigrant carver Thomas Wightman. More frequently, including on the present example, the leafage was reduced to two dimensions by Boston’s most skilled decorative painter and gilder, John Ritto Penniman. His refined workmanship and assured hand is evident here in the particular treatment of the gilt leafage forms, with the details picked out with three different shades of umber glazes ranging from light to very dark. This elegant treatment remains here in perfectly untouched original condition, including the original protective over-varnish.

Seymour’s hand is also found in the combination of birds-eye maple on the drawer fronts, and mottled or blistered maple framing around the mirror. For the blistered selections, he accentuated this by selectively scorching the natural figure to deepen its color and heighten the dramatic effect – this was a favorite treatment of his. As usual with Seymour, all veneer and crossbanding work is done with great precision. The mahogany for the mid-top is also beautifully figured and carefully selected, as is typical for the Seymour shop.

Other features match his habits of construction. Drawers employ some of his favorite secondary wood choices – white ash fronts (veneered on the face), cherry sides, and white pine backs and bottoms. The particular arrangement of glue blocks on the underside of  the lower drawer bottoms follows his habits and is based on his father’s English training. The mirror standards have a elegantly shaped brackets backing them which provides additional strength where they are anchored. The standards and brackets are blind-mortised into the thin top of the case for the small step-back drawers. A rounded cross-grain mahogany molding is used to face the horizontal mid-top, again a typical choice of his in this period.

The family name of “Whitridge” inscribed on the dressing table cannot at present be linked to a specific person. Several Whitridge families were living during the period this dressing table was made, in the neighboring Massachusetts towns of Dartmouth, New Bedford (where they spelled it “Whiteridge”) and Rochester (northeast of New Bedford). Others of that name lived in Salem, Danvers, Middleton, Hamilton, Wenham and Gloucester. Two marriages in Rochester, Mass. occurred within the estimated date of the dressing table. Others are possible in these or neighboring towns.
∙           Capt. Joseph Whitredge married Waclove [Waclow? Mclove? Maclow?] Biller[?] both of  Rochester, 29 May 1811, at Rochester, Mass.
∙           Elizabeth Whitridge married Thomas Snow, 29 July 1816, Rochester, Mass.
.           William Cushing Whitridge, M.D., and Olivia Cusing [-], Nov. 25, 1784.
Dedicated genealogical research in these towns might reveal a Whitridge/Whiteridge/Whitredge couple that were married or were furnishing a house in the period ca. 1810-1815.

Condition, prior repairs
The left rear leg has been broken at the lower case edge and previously repaired. There are several small veneer and cockbead molding sections replaced. There are a few small wood patches, notably where the lock levers contacted the drawer blades. The backboard behind the mirror has been removed and replaced several times, though the mirror is clearly very old and likely original. Several of the drawers have at least some glue blocks replaced on the undersides. The brass finials and the turned wood drawer pulls are all later replacements (original pulls  would have been stamped brass knobs with circular back plates, 2 different sizes). Previously refinished overall, with the exception of the mirror brackets and crest rail of the mirror – the gilding and painting is all original. Dovetail-edged strips which used to be mounted on the bottom of the step-back drawer unit are missing. 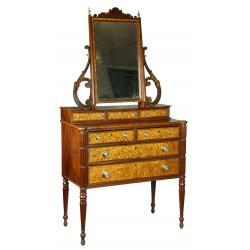 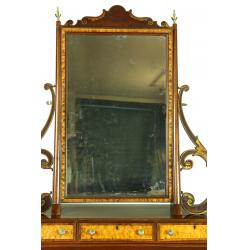 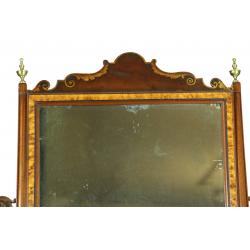 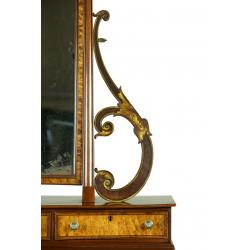 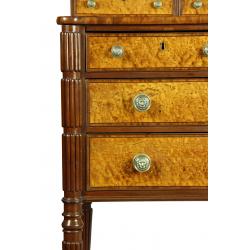 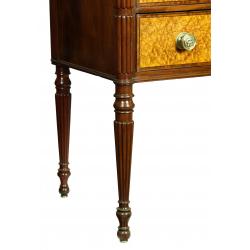 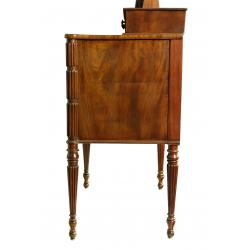 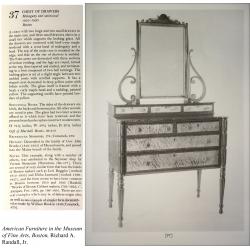 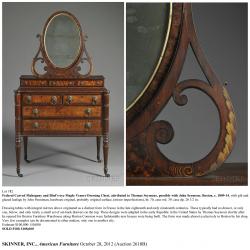 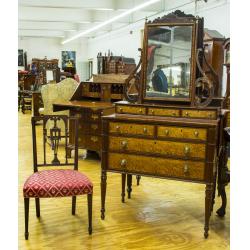